Does Magellan have superpowers?

Magellan has been wearing the GPS logger for a couple of weeks now.

On Day 1 he managed to lose his collar. Luckily a search of the back garden found the collar tangled in the netting which is theoretically there to protect the tomato plants from things like being eaten by birds and to prevent cats sitting on the seedlings.

On Day 2 he managed to get locked in the garage all day.

On Day 4 he managed to get onto the roof and then couldn't get down again.

Yesterday I had a day off work and he spent most of the day inside keeping me company despite being exhorted to go outside and collect some interesting GPS data.

However, on Day 3 he exhibited super powers.

Does this look like a cat with super powers to you? 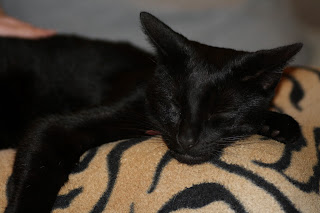 He wandered around our house,  exploring the neighbourhood in an approximately 100m radius. Then suddenly he zoomed off, out of our little residental suburb, through the reserve, over the creek and into the industrial zone in the next suburb over. A distance of approximately 1.5km.  Wow!  That is a huge distance for a little cat, and the creek wouldn't be easy to cross unless he used one of the pedestrian bridges. 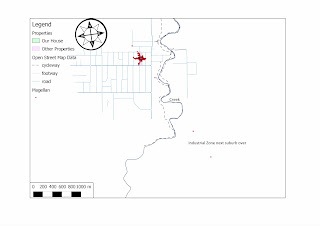 So we looked at the data a little more.  It appears he made his journey to the industrial zone in approximately 20 seconds. Supercat powers activate!

This meant it was time to take a look at the data, was it possible the GPS could be recording erroneous points?  It was quite possible, and there are known issues with the GPS, particularly in urban areas with regards to interference, lines of site, buildings in the way, signals bouncing off buildings that sort of thing.

Google for 'multipath reflection' if you want to learn more about this issue.

So we needed to refine the data, because as all good geeks know, if your data isn't accurate, it is pretty much worthless.

So we applied a filter in the GIS software to only show data where the speed was greater than 0kph and less than 10kph. So yes, we also aren't interested in knowing when he is sitting still, only when he is moving. Then the map looked more like this. 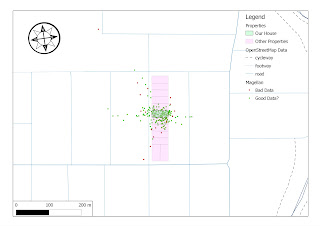 The green dots represent what we believe are the good data and the red dots represent points were the speed is recorded at greater than 10kph. This shows that Magellan is much less adventurous than initially thought. In fact it also shows that he appears less adventurous than Corsair, confining his wandering to primarily our house and the neighbours either side.  But of course, it also calls into question the initial data we got for Corsair, did she really wander off in a straight line for 600m, or is that another example of erroneous data?

So we applied the same filter to the data from Corsair's adventures back in Febuary.  See the original map here.
The new map with the filter applied is presented below. 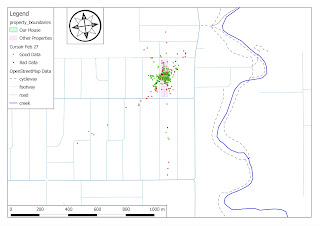 And we got some very surprising results.  While some of the data shows Corsair moving at speeds of greater than 10kph, which we are considering unreliable data, we also have what we are considereing reliable data, which shows that she did make those journeys in straight lines out and back again.  She is roaming at least 600m from the house and she is also roaming a lot further than Magellan.

Initial conclusions we can make. Magellan probably doesn't have super powers. Corsair roams much further than Magellan and stays away from our house for longer periods of time.  I do not know how much of an impact Magellan's car accident had on him, while he does appear to be completely physically recoved, he does seem to spend more time at home than he used to.

Also - house cats can move very fast, especially over short distances. I'm not sure what the top speed on a house cat is. It looks like we need to investigate better ways of extracting data and being able to determine 'good' versus 'bad' data.

Nigel is building a post GIS database in order to assist us to more effectively evaluate the data over time and make it easier to query the data.

Upcoming topics: Magellan stayed out all night with the GPS tracker, so we can find out if their night wanderings are different from their day wanderings

And its probably about time Jumble got a chance to wear the GPS tracker.