So Who Are We?

Renee is an archaeologist with a keen interest in landscape archaeology, history and GIS. Renee also believes that the internet is for cat pictures. Below is a photo of Renee knitting with Jumble's help. 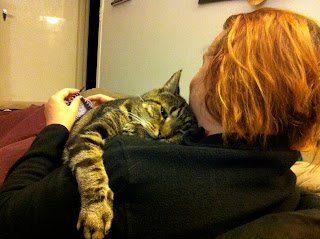 Nigel is a geek and programmer extraordinaire and a firm believer in the scientific method.Below is a photo of Nigel and Corsair. 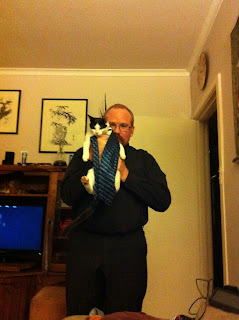 We live in a low density suburban area with a nice sized back yard. The cats are locked in at night and have access outside during the day. There is a cat door, so they have access to the house at all times.  All three cats are short hair domestic cats, all three are rescue cats who were adopted as young kittens. All three cats are desexed and healthy.

Corsair is a two year old female cat and fairly overweight for a young cat. She is an active young cat who likes ‘fetching’ things and bringing them inside to show off, said things include flowers, rubbish, leaves and mice. One of the goals of this research is to determine if she has a second ‘home’.

Magellan is a two year old male cat, he is underweight. He is also an active cat. Both Corsair and Magellan are the same age as they were adopted at the same time but they are not litter mates.  Magellan was in a car accident at the end of December 2012, he broke his pelvis, and while he appears to be fully recovered it will be interesting to know if the accident has slowed his wandering.When you name a cat Magellan you spend a lot of time explaining no you didn't name your cat after a GPS, he is named for the explorer, which is indicative of his personality. 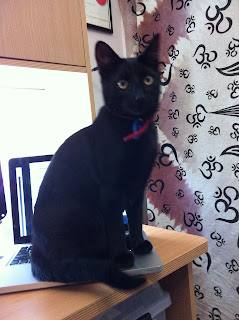 Jumble is a thirteen year old male cat. He is a lovely cat who is slightly overweight. We assume because he is older, he much prefers sleeping on the couch and is much less active, but it will be interesting to see if that is the case.
Posted by Unknown at 01:56