Does Jumble really sleep all day?

Does Jumble really sleep all day?

Jumble is our 13 year old cat.

He has been with me since I adopted him as a tiny kitten. A friend who is a vet was told to euthanaise Jumble as a kitten as he was considered to feral to be rehomable. Vet friend knew I was in the market for a ginger kitty, she introduced me to Jumble. The non ginger feral biting kitten who couldn't be rehomed, immediately curled up in my lap and started purring. It was love at first sight, and very little has changed since. Jumble's favourite place is still curled up in my lap, or curled up in our bed, or sitting on top of the laptop or knitting that he percieves is taking up his rightful lap space. 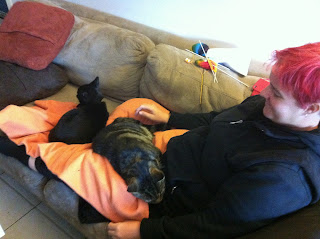 For the last couple of weeks the GPS blogger has been attached to Jumble.  We've got a couple of weeks worth of data from each cat now and so far all we have really determined is that GPS loggers have a fairly big margin of error. We have also established that Corsair roams a little bit further than Magellan and may have a second home. None of the cats roam more than about 150m from our house.

Now, observed data tells us that Jumble spends most of his time sleeping. On the couch, on the bed, in the hammock, outside in the sun in the backyard. And this time of year, once we come home from work, he follows us inside and sits expectantly on the heater vent looking at us until we turn on the heating. Then once someone sits down he will select a lap, usually walking over everyone else in the process. He is secure in his role as dominant cat in the household.

So where is he going when we are not home? 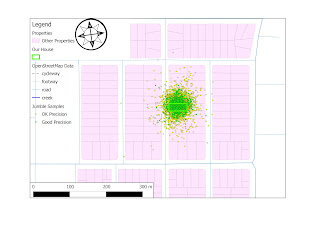 The answer is, not far at all. These maps show two weeks worth of data. If we look at just the green dots, those that are considered to be the most accurate data, it appears he is travelling no further than 50m from our property on average. The focus of his activity is our home. 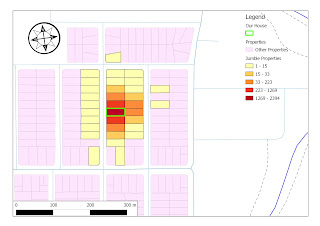 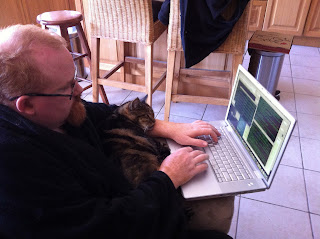 We also looked at the time stamps on Jumble's data, does he do anything particular at certain times of the day? Are there noticable patterns, like there are with Corsair's data? 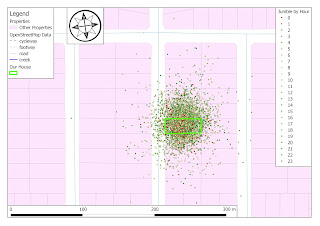 This map really shows us two things.
One - the GPS logger is innacurate, because Jumble sleeps on our bed all night, or he has a secret cat door to the outside world.
Two - Jumble does most of his roaming in the middle of the day and in the early afternoon. When his humans are home, Jumble likes to be home too.

It's getting on towards winter, the days are getting shorter, the weather colder and we've noticed all three cats have a tendancy to be home when we get home from work. This is not the case in summer when it doesn't get dark til later. Cats like houses with heating. Its also possible that the Do Not Feed tags that were attached a couple of months ago are working, as they are also coming home hungry...

So internet - what questions would you like answered next?
Its probably about time we did some comparable statistical analysis on our data sets...

Or maybe I should just post more cat photos :)