How does the GPS logger work?

We have a little plastic holder that attaches to the cats collar. The GPS logger is easily inserted and removed from the holder (though it's significantly harder to insert and remove while the cat's attached!).  The GPS logger weighs 22 grams and is about the size of a matchbox. It charges via USB overnight. The product specifications say it has approximately 30 hours of battery life, however we've found that it more like 12 hours, although you can configure it to take more or less samples which would probably extend the battery life. The photo below shows the blue plastic GPS holder attached to Corsairs collar, it also shows her incredibly fatty belly! 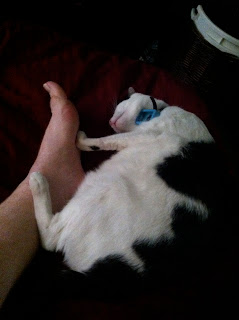 We have configured it to record co-ordinates every six seconds.  Advice on the support forums suggests that configuring the device to record points less frequently actually uses more battery as it goes into sleep mode and then has to reacquire the satellite connection.

The GPS logger is not a real time GPS tracker (those were a lot more expensive), it just records data that we can download.

At the end of each day we download the data from the GPS logger into the software that came with it. That software is called @Trip PC. Then the data is exported as a .gpx file and loaded into QGIS where we can then view the data overlaid onto maps and manipulate the data, for example getting it to show time stamps which allows us to draw conclusions.

Does Corsair have another home?

So our initial research question was, does Corsair have another home?

As such I present our first two days of data logging of Corsairs daily movements. This data was recorded in late February (which is summer in Australia) and both days were sunny and warm with a top of 28C.

Each of the points on the map indicate a set of GPS co-ordinates collected by the logger. As you can clearly see the focus of activity is clustered around two houses, one is our house, the other is in the next street over. She also spends quite a bit of time in the two houses either side of us. She also goes wandering up to 600m on straight walks out and back. Its interesting to note that the bulk of her activity comprises of meandering in an approximately 100m radius. When she goes further it tends to be a direct walk, straight out and back in a fairly timely fashion.

Personally I'm relieved to learn she is not going down to the parkland near the creek. This would be the area that they would find native animals to hunt.  I have no issues with them hunting mice, but I would get upset if they started bringing home native birds and animals. I should emphasize that my cats are kept inside at night, are de-sexed, micro-chipped and vaccinated.  You are probably going to need to click on the map to view more detail. 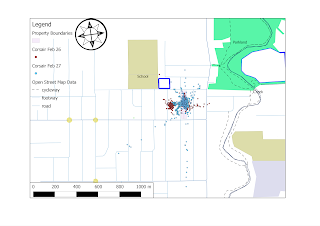 This second map shows only one day of Corsairs movements, but we have colour coded the points to show what times of day she goes where. The colour scale is gradiated, starting with dark red for morning and gradually changing through orange for late morning, yellow for early afternoon, green for late afternoon. 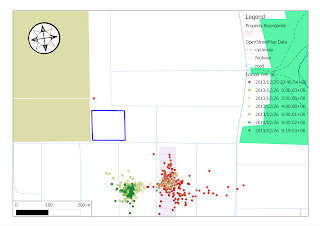 What this map shows us is that she pretty much spent all morning at our house and around our house, while pretty much the entire afternoon was spent at someone else's house.  Our house was the focus of activity for her morning adventures. House no. 2 was the focus of activity for her afternoon play.
This is only one day's worth of data, and looking at the first map, shows that while she spent a lot of time at House no. 2 on the first day, she spent very little time there on the second day.

So we can't definitively say she has another home yet.
Obviously the solution is we need more data!!!

Stay tuned for the next post - Does Magellan have superpowers? (otherwise titled the fallibility of data)