Does Magellan have a routine?

One of the big conclusions drawn from series like Secret Life of Cats is that cats in urban areas share territory without big confrontations through time division multiplexing.  Which means that cats will share the same territory, but not be in it at the same time.

All my cats are unrelated, while Corsair and Jumble got along fairly well, Magellan was always the loner.  Jumble was the dominant cat in the house, since his death, Magellan and Corsair have been uneasy around each other. Magellan would like to be dominant cat, but Corsair isn't a fan of that idea. 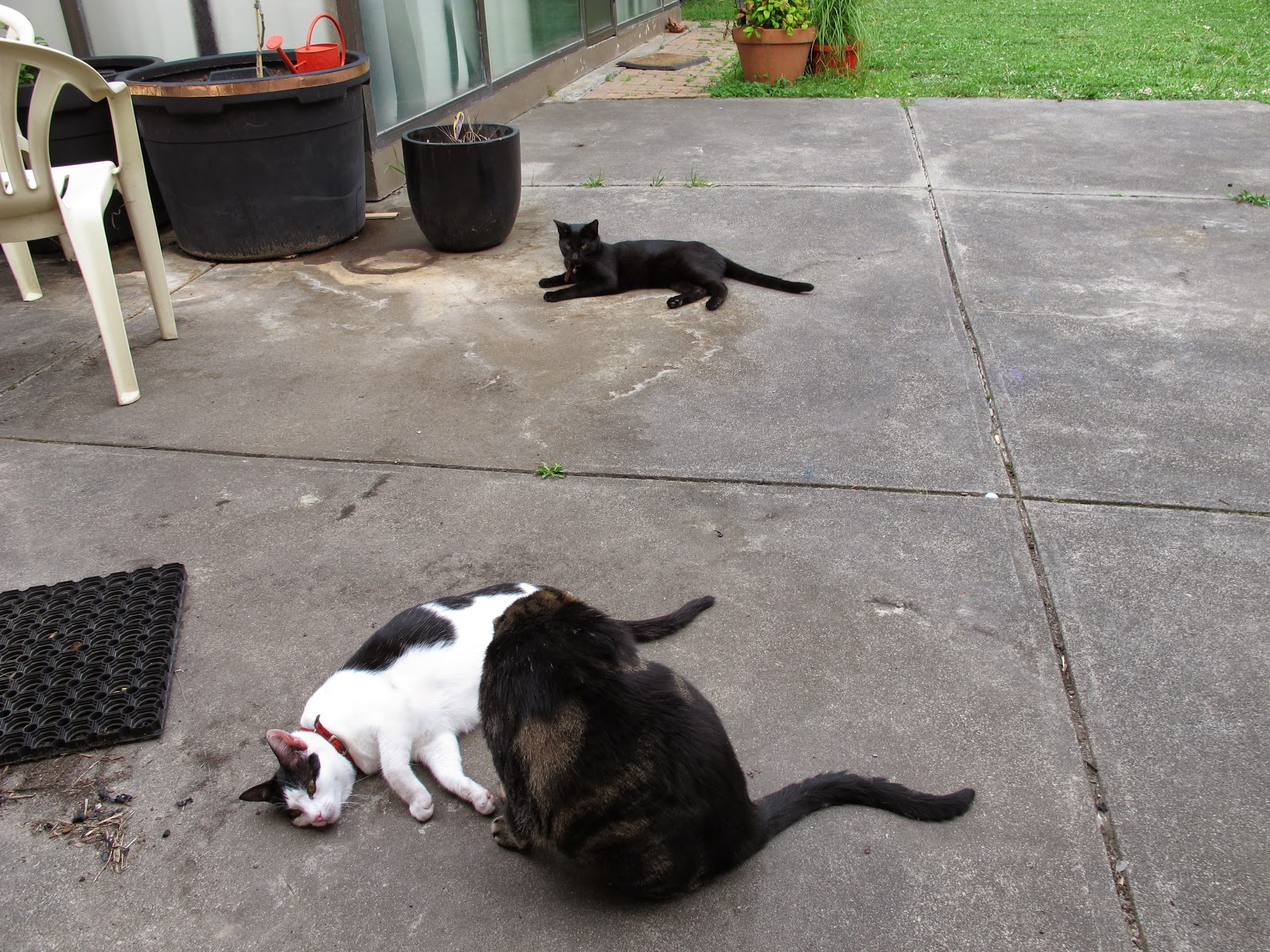 Also neither cat is happy with the new kitten. Magellan has asserted his dominance over the kitten, Corsair has not. Bento thinks Corsair should play fight with him.  Corsair doesn't like this, but for some reason doesn't slap the kitten down, which just encourages Bento to keep playing.  Corsair's waving tail is far to tempting and must be attacked. 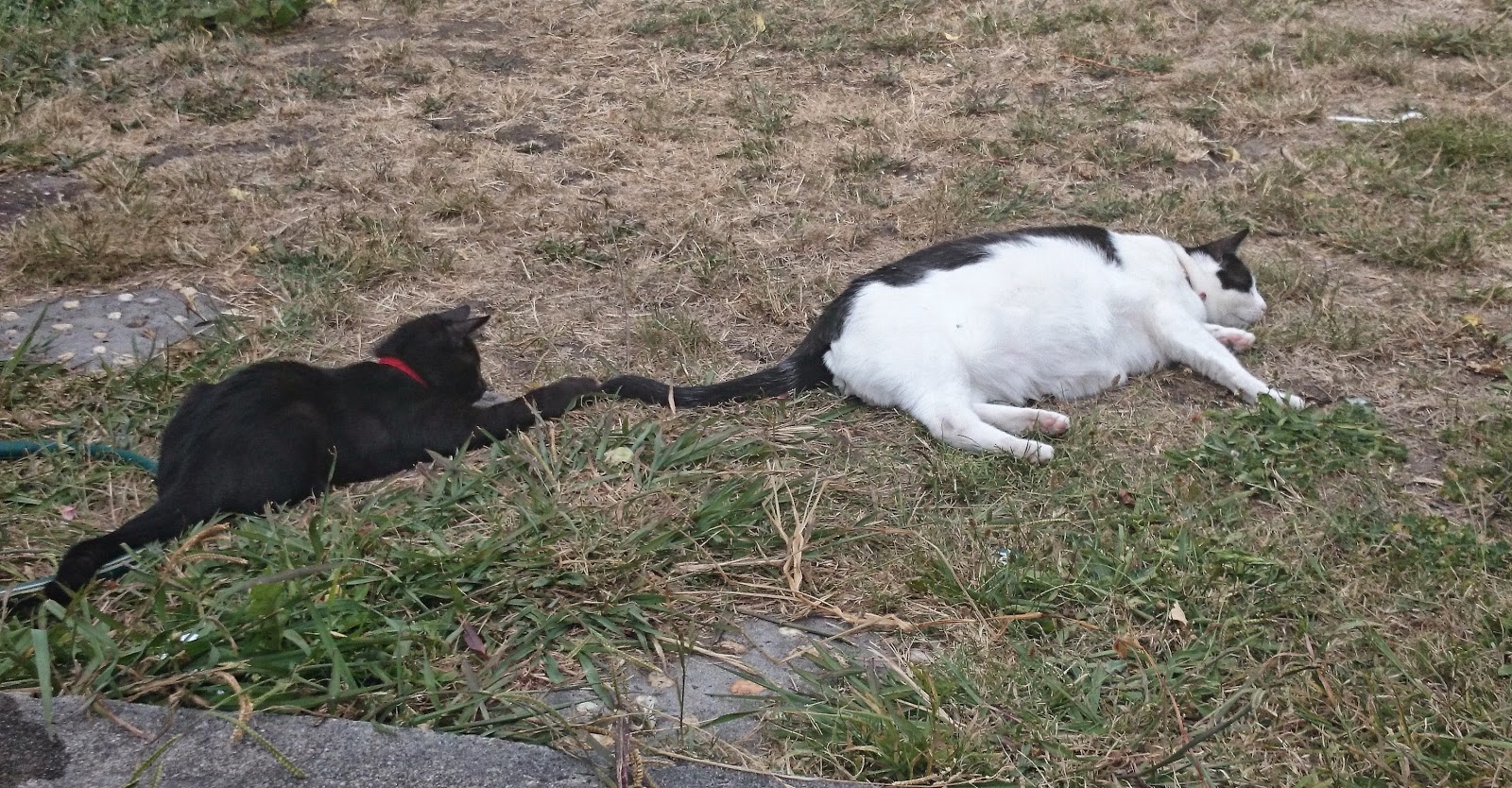 Since the arrival of the kitten, Corsair and Magellan have been heading out in the morning and not spending as much time at home.  I expect this to change when the kitten starts roaming more, but for now Bento seems happy to chase crickets in the back yard.

So, lets go back to our original premise, does Magellan have a routine and where is he spending his time if not at home? Looking at the data it appears that Magellan does have a routine. The following animated gif shows data from a time period of a 2.5 weeks. It shows where he is at hourly intervals.
At 4am the GPS is on the charger, at 7am he is let outside, he starts his morning roving all over his territory, I guess just to check its all there.  Magellan doesn't like to use the litter tray, instead waiting to be let out and happy to spray around the garden, marking his scent. His territory seems limited to the houses either side of us and three houses to the east over the back fence.  Remember, Corsair's second home is to the west, over the street.

Between 9am-1pm he tends to stay north of our property. Around 2pm he heads east.  At 3pm, the school kids get let out and he comes home, or at least closer to our house. Sometime between 6 and 7pm he comes home, gets dinner and gets locked inside, after which he tends to perch on the front window sill watching the street. A review of google earth shows that the properties to the north east contain either bungalows or sheds in the back yards, so I wonder how much of his time is spent on roof tops. It's also worth noting that the neighbours to the south got a dog a few months ago and I suspect this has dramatically reduced the time spent in the neighbours yard.

So it does appear that he is avoiding both the kitten and Corsair, although the G-Paws unit has now been attached to Corsair and we will see if her habits have changed since the kittens arrival.

Magellan isn't avoiding all the neighbourhood cats however, I've taken him to the vet twice this year with an abcess on his head from cat fighting.

I mentioned a few posts ago that we had purchased two new GPS units.

The first GPS is a Mr Lee's Cat Track 1. This is much like our original GPS, however its an upgraded version.  Nigel spent quite a bit of time swearing at the computer trying to figure out how to download .gpx files. If you use this device as advertised, it returns data that looks like this 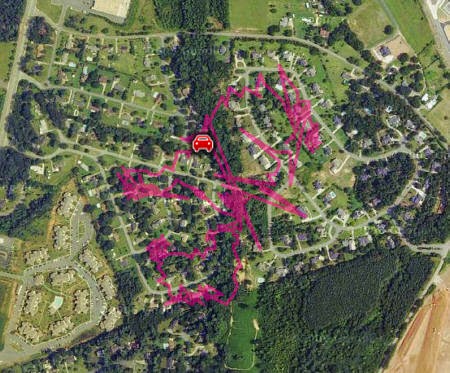 We however have been extracting the raw data and analysing it in QGIS.


In order to test the new GPS for accuracy, we strapped it to a bike and rode around the block, which returned surprisingly accurate data, leading us to believe that HDOP wasn't a great estimate of accuracy afterall.  Although its also worth noting that precision is dependant on the number of satellites the GPS can access to triangulate the position.  A bike riding down an open road is going to get easier exposure to satellites than a cat skulking around under houses, sheds and through the undergrowth.

So we've filtered by the number of satellites rather than HDOP on this occasion to determine accuracy.  As discussed in the previous post, Bento, the newest kitten, isn't travelling far from the house at all. 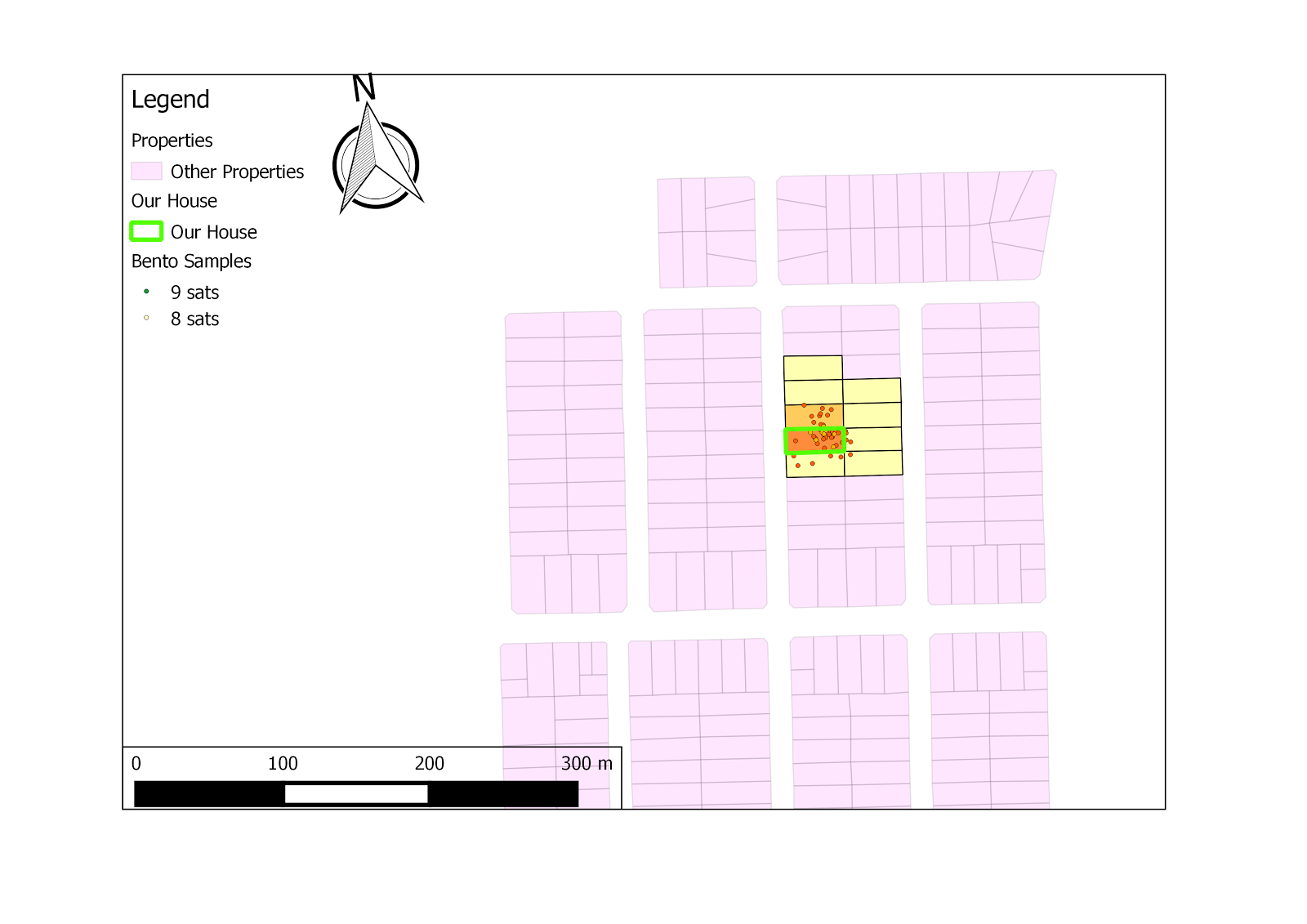 The second GPS we purchased is a G-Paws Track, this unit is smaller than the Mr Lee unit and easier to extract the data from. There is an option to log into the G-Paws website and simply upload the data into a webpage. However, you can also simply plug it into your computer and it shows up as a flash drive with .gpx files on it.

The downside is that the .gpx data is less verbose than the Mr Lee unit, it doesn't contain any HDOP/VDOP data or number of satellites used data.  However, the upside is that it appears much more accurate than the the Mr Lee unit.  Its also a smaller unit, so despite the slightly higher price tag, it seems the better GPS.

Here is a photo of Corsair being unco-operative and modelling the GPS. 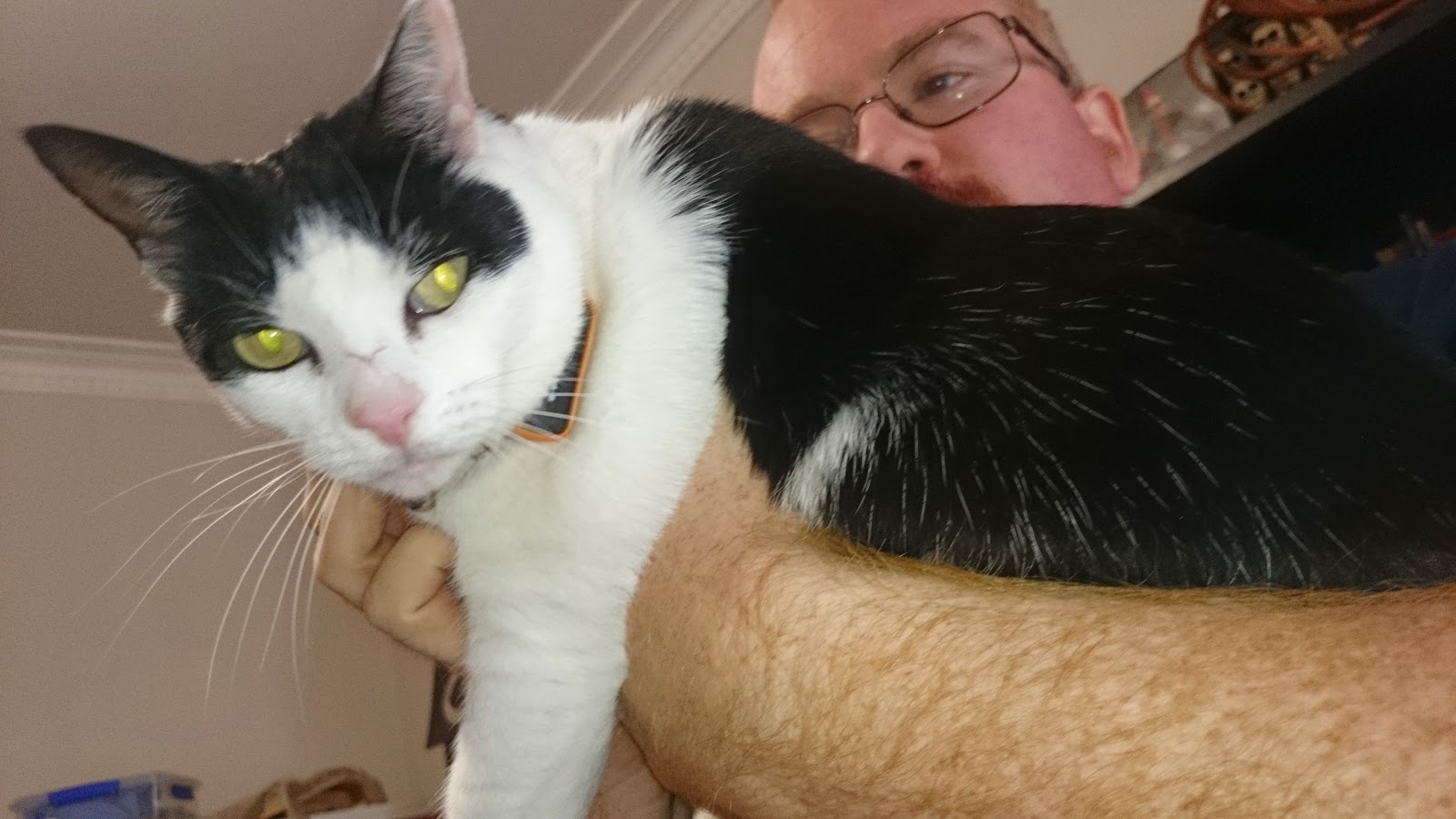 The map below shows Magellan's wandering for the last couple of weeks. This data is unfiltered. 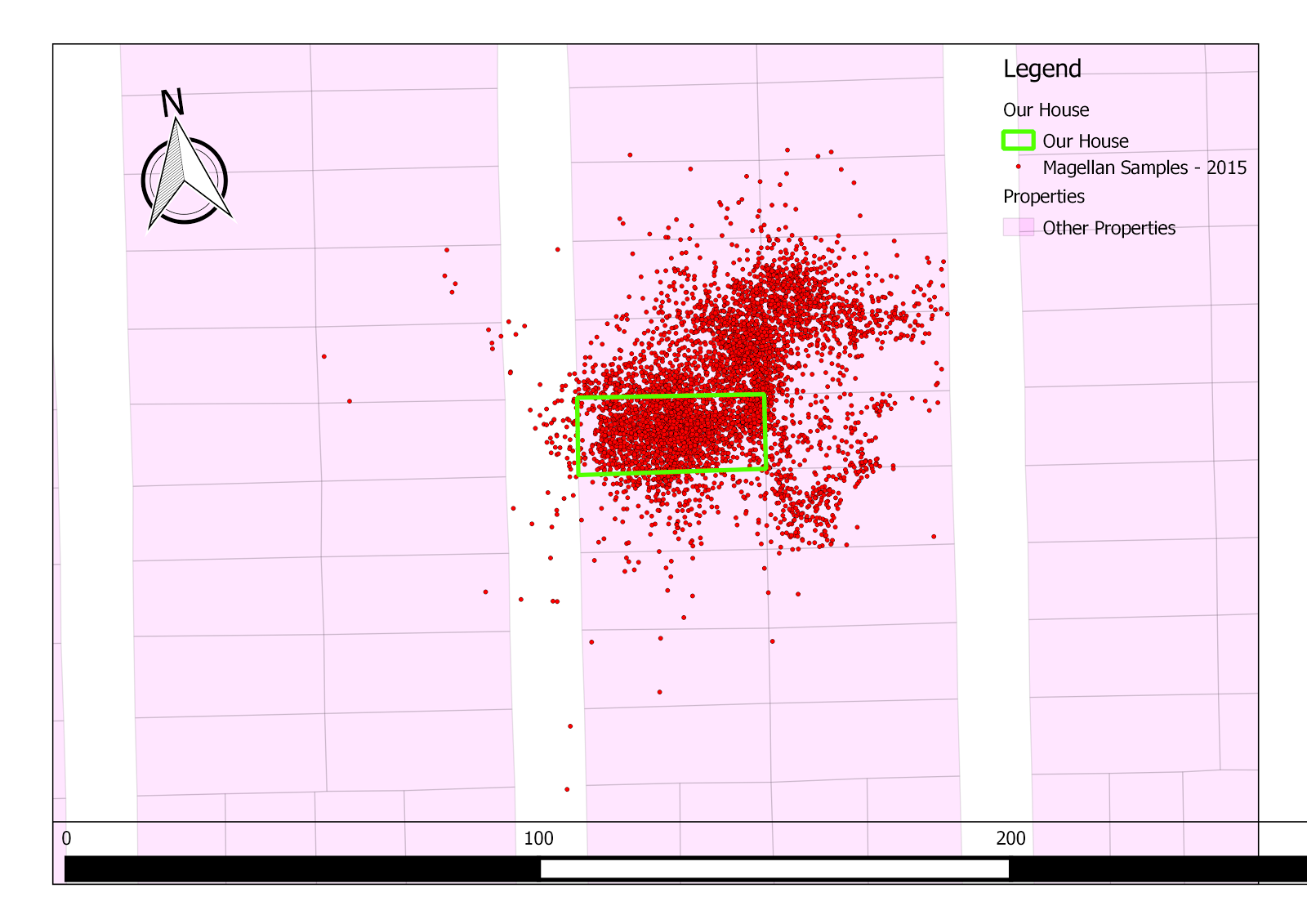 This data shows that Magellan is travelling no more than about 70m from the house.  This is is a bit different than results gained from the Mr Lee Unit.  This earlier post shows Magellan travelling upto 150m from the house and spending more time on the other side of the street, this time he is sticking to our side of the street. Its worth noting that there is a years worth of time between the data collection, and Magellan has broken his leg in that time, although he does appear to have made a full recovery.

I'm going to break Magellan's wandering down in more detail in my next post.